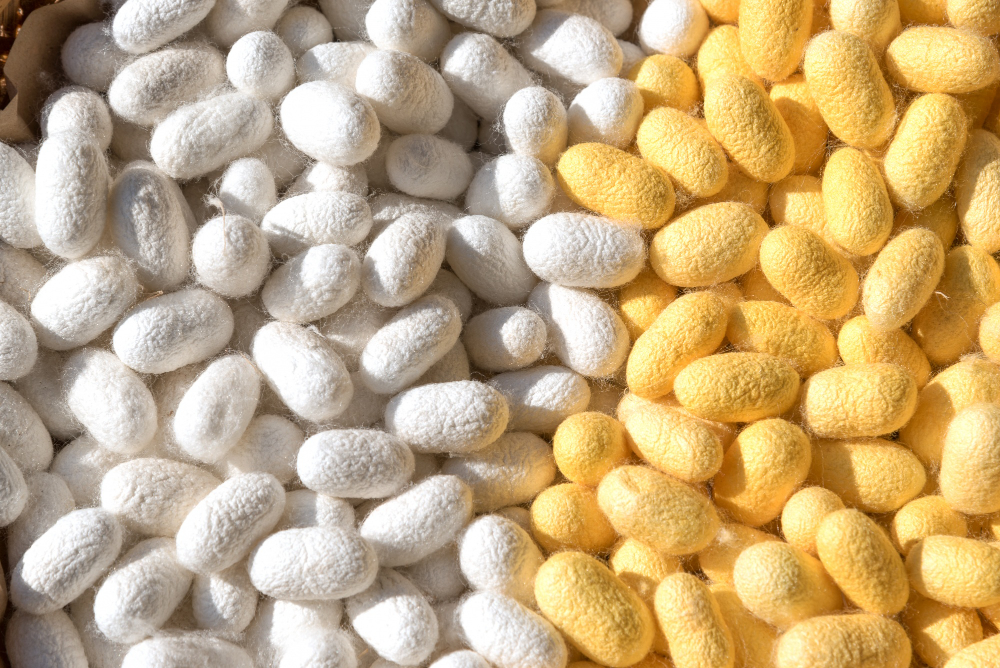 Sericulture and Silk Industry is an avocation in India at least the second century B.C. According to historians, raw silk was exported during the reign of Kanishka in 58 B.C. Some legend says that Chinese Buddhist monks smuggled in eggs of silkworms and seeds of the Mulberry tree in their hollow bamboo sticks. In its long history, silk industry has passed through periods of great prosperity as well as decline. The modern silk history dates back to the 15th Century, which was also famous for sculpture and paintings.

During the 18th, 19th and early 20th centuries sericulture flourished in the States of the then Bengal, Mysore and Kashmir. Indian silk industry has improved manifold since independence from the raw silk production level of 1437 MT during First Plan period (1969-74) to 23679 MTs by the end of March 2013. This has been possible due to the sustained efforts of Central Silk Board, Govt. of India, its research agencies, Provincial (State) sericulture departments and private stakeholders. Development and introduction of improved races of silkworm breeds, high yielding food plants, improvement in rearing practices, organized seed production network, technology up-gradation in reeling, weaving, wet processing, etc., along with the investment made by the governmental agencies have led to an overall improvement in productivity and quality.

India’s silks are known for their finery and artistic designs and distinct colours. Today India is the second largest silk producer of raw silk and also has the distinction of being the world’s largest consumer of pure silk. The country is known the world over for the exquisite brocade fabrics of Banaras, silks of Karnataka, tie-and –dye and Patola of Gujarat and Rajasthan, ikats from Orissa, fine Bandhej and temple silks of Kancheepuram and Tanjore, etc., are only a few of the myriad range of silk weaves, textures and patterns available in India.

India is the only country in the world to produce all the four known varieties of silk including Mulberry, Eri, Tasar and Muga. Mulberry is the largest practiced sericulture industry accounting for almost 76 per cent of the entire silk production. The industry provides employment to more than 7.6 million people across 51,000 villages, who operate 328,627 handlooms and 45,867 powerlooms with 8,14,616 weavers.

Sericulture is an agro-based industry. It involves rearing of silkworms for the production of raw silk, which is the yarn obtained out of cocoons spun by certain species of insects.

Its exports of silk are worth about US$ 360 Million of which 70 per cent comprises natural silk yarn and fabrics, 13 per cent made-ups and 26 per cent garments. Domestic demand stands at 28800 MT compared to production of 23679 MT annually thanks to the growing demand for silk fabrics and sarees from Indian women. Aggressive promotion of the silk industry in India has attracted a large number of organized players to set up modern units for both apparel as well as home textile production.

Cultivation to feed the silkworms that spin silk cocoons and reeling the cocoons to unwind the silk filament for value added advantages like process and weaving are the major activities of sericulture.